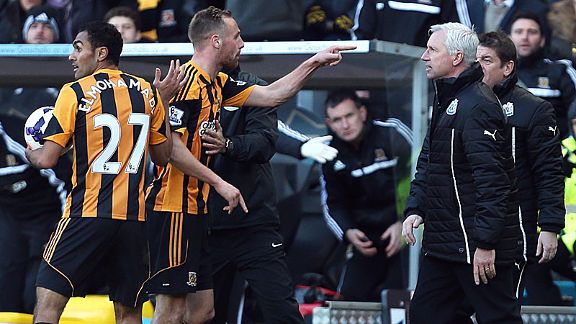 Newcastle United can’t even win 4-1 away from home at Hull City without managing to squeeze a major controversy into the situation.

Manager Alan Pardew’s headbutt on David Meyler became a global debate Saturday as ex-players such as Gary Lineker, Alan Shearer, Graeme Souness, Paul Merson and Steve Bruce all weighed in to have their say on what was an unprecedented incident in the Premier League.

Lineker suggested it was “inexcusable,” while Souness and Shearer reportedly said Pardew should be axed, according to beIN Sports’ Andy Kerr.

With Newcastle 3-1 up, Pardew appeared to take offence as Meyler eagerly pushed past him to take a throw. The Toon boss flicked his head toward the Hull player and was promptly sent to the stands. Pardew instantly put his hands up and admitted liability before apologising to the Toon Army and insisting he would change his ways.