Rafael signed for Manchester United along with his twin brother Fabio in January 2008 and has established himself as a regular in the first-team set-up at Old Trafford, with many tipping him as the long-term successor to Gary Neville.

The Brazilian – who got his first call-up to the national side in July 2010 – is a right-back also able to play as a right-sided midfielder and was part of his country’s squad at the World Under-17 Championships in 2007.

A player very much in the Cafu mould, Rafael began his career at Fluminense as a youth where he was initally spotted by United’s scouting network, but having been brought to the club, Sir Alex Ferguson was hugely impressed with his performance against Peterborough in a pre-season friendly in August 2008.

That led to Rafael making his debut for the Red Devils at the start of the 2008-09 season, and he went on to impress greatly in the absence of Neville through injury, scoring his first goal for the club in November 2008 with a stunning last-minute volley against Arsenal. His performances in his debut campaign led to a place on the shortlist of nominees for the 2009 PFA Young Player of the Year award.

His progress was hampered slightly in his second season, as a shoulder injury in pre-season kept him out until October, while an ankle injury in the Carling Cup final limited his appearances for the rest of the campaign. Nonetheless, Ferguson placed his faith in the youngster for a number of high profile games, including crucial Champions League ties against AC Milan and Bayern Munich – where his impressive first-half performance was tempered by a sending off for a foul on Franck Ribery.

Rafael continued to go from strength to strength in the 2010-11 season, usually starting as United’s first-choice right-back when fit ahead of Wes Brown and John O’Shea. Injuries frustrated his campaign on a number of occasions but the sale of Brown and O’Shea in July 2011 signalled that he will be in a straight battle with his brother for a regular starting berth.

Strengths: Rafael is a forward-thinking and adventurous right-back, who is not adverse to tough tackling.

Weaknesses: Positional play and the occasional lapse in concentration can get the young defender into trouble – most notably against Ribery in the 2010 Champions League quarter-final.

Career high: The Brazilian ended 2008-09 with a nomination for the PFA Young Player of the Year award, and a place on the bench for the Champions League final just a year after watching from the stands in Moscow.

Career low: Being sent off for two bookable offences as United crashed out of the 2010 Champions League at the hands of Bayern.

Style: Pacy, skilful, creative; a full-back with much promise.

Quotes: “The twins look the same but they don’t play the same. Rafael is more forward-thinking, and very fast running with the ball, more explosive. He can go a long way.” Manchester United starlet Rodrigo Possebon forecasts a bright future for his team-mate.

Trivia: On 19 April 2009, Rafael and his twin brother Fabio, started a match together for Manchester United for the first time in the FA Cup semi-final against Everton – over 15 months after signing for the club. 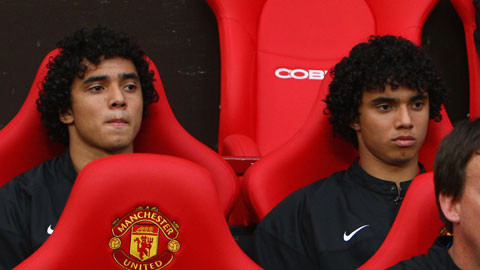