Podolski has been tipped for big things for many years and his host of international experience eventually saw Arsene Wenger bring him to the Premier League in 2012.

Podolski’s career could have taken a very different course as he was born in Poland in 1985, but it was Germany who handed him his first cap in June 2004 at the age of 19 and he travelled to Euro 2004, making one appearance in Portugal. His tally of 10 goals in 17 Bundesliga games after breaking through at Cologne had earned him international recognition and Podolski took the admirable decision to remain with the club despite their relegation that summer, scoring a league best 24 goals as they secured promotion at the first attempt.

Despite his club’s struggles, he emerged as a key player in the 2006 World Cup finals, scoring three goals in a productive partnership with fellow Polish-born striker Miroslav Klose. A second relegation had already spelt the end of his Cologne career prior to the tournament, but a move to Bayern Munich never really worked out as he was forced to make do with a place on the substitutes’ bench on numerous occasions in the following three seasons.

After scoring another three goals at Euro 2008, including two against his home country Poland, and still failing to command a place in the Bayern side, Podolski rejoined Cologne, back in the Bundesliga, in the summer of 2009 but another relegation at the end of the 2011-12 saw him leave for another challenge and he joined Arsenal for around €12 million.

Strengths: The versatile Podolski boasts real pace and he has shown time and again on the international stage that he has the composure and quality required of any top striker. A cultured finisher, Podolski also has a creative streak and links up well with his team-mates.

Weaknesses: His inability to perform to a consistently high standard on the domestic scene is a real concern and he lacks the out-and-out brilliance and unique quality of a Fernando Torres or Cristiano Ronaldo.

Career high: Being named the Best Young Player at the 2006 World Cup finals after his three goals helped Germany reach the semi-finals. Cristiano Ronaldo, Lionel Messi and Cesc Fabregas were also nominated for the award.

Career low: A second relegation for Cologne in 2006, despite scoring 12 goals in 32 games, which forced him to leave his first professional club.

Quotes: “He has shown the hunger to work and wants to improve himself. He takes his occupation very seriously and lives his life accordingly. But it is difficult to always focus on what is important in football, because there are so many influences around him. Footballers these days are megastars – that is not Lukas’ fault.” Former German manager Jurgen Klinsmann, September 2008.

Trivia: ‘Poldi’ has an unlikely fan in notorious socialite Paris Hilton. When asked which German footballers she knew during the 2006 World Cup, the ‘multi-talented’ celebrity replied: “I think Lukas Podolski is very good looking and he is an amazing player.” 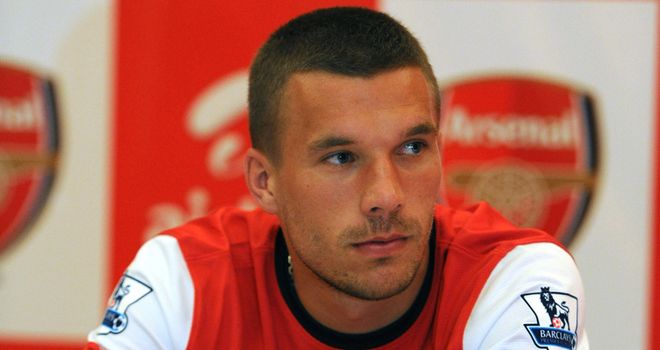