Arriving at Manchester United’s youth set-up in 2007, Welbeck quickly caught the eye and was drafted into the first-team squad in 2008-09.

He impressed in United’s Under-18s run to the 2006-07 FA Youth Cup final and made more waves in the reserves the following season, but then began to push for a first-team place as he made starts in the Carling Cup and Champions League.

Looking to play more regularly, he went on loan to Championship side Preston in January 2010 until the end of the season, although it was cut short through injury. Once fit again, he move on loan to Sunderland for 2010-11 and scored six goals in 28 appearances, gaining many plaudits for his pace and skill.

Having been promised a chance to make an impression on the first-team in the 2011-12 campaign, Welbeck took his opportunity with both hands as he relegated previous top-scorer Dimitar Berbatov to the bench and also made his senior international debut for England, as a substitute in a 1-1 friendly draw with Ghana.

Strengths: Likened by Sir Alex Ferguson to former Arsenal forward Nwankwo Kanu, Welbeck boasts more pace and strength and is tough to deal with in the box.

Weaknesses: Positionally he is still learning the game and he needs to determine when to make runs at the right time. His goalscoring could also be improved.

Career high: Made first-choice for the start of 2011-12 season, he relegated the likes of Javier Hernandez and Dimitar Berbatov to the bench.

Career low: Injury cut short his time on loan with Preston and he must have wondered if he would be afforded a chance to shine again for his parent club.

Style:Strong, confident, skilful, a tricky customer to deal with,

Quotes: ”He’s got a talent as good as anyone in the game for the forwards. I think he’s almost certain to get his chance now. He’s confident, intelligent and certainly got the technical skills. He has a great belief in himself.” Sir Alex Ferguson on Welbeck, 2011.

Trivia: Welbeck rejected the chance to play for Ghana, but made his senior England debut against the country of his parents’ birth. 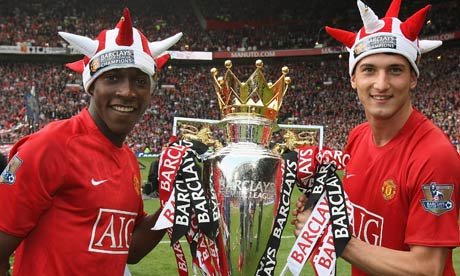 This blog is protected by Dave's Spam Karma 2: 2479 Spams eaten and counting...