A consistent and reliable goalkeeper, Jones has not set the world alight during his career, but has found a place as a dependable No.2 at Liverpool.

Jones began his career at Bayswater City SC in Western Australia, before moving to England to play for Middlesbrough in 2001. Nine years at the club saw him make just over 50 appearances for the first-team and he was sent on loan a total of five times to clubs including Blackpool and Sheffield Wednesday.

Strengths: Tall and agile, he is composed and reliable when called upon.

Weaknesses: Injury-prone and has not found the drive to search for regular first-team football.

Career High: Playing against Steaua Bucharest in the semi-finals of the UEFA Cup in 2005-06.

Career Low: In October 2006, his own fans turned on him, throwing coins and other missiles during Sheffield Wednesday’s tie against Queens Park Rangers.

Style: Solid, dependable, a good reserve to have on the bench.

Quotes: “They’ve told me they want me to do what I do and put pressure on Pepe Reina and Diego Cavalieri. That’s fine, I’m happy to do that, I’ve got to give it a go.” Brad Jones, August 2010.

Trivia: Jones’ father may be from Australia, but his mother comes from Maghull, Liverpool. 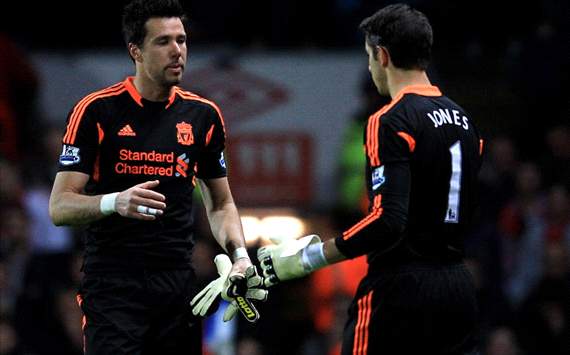