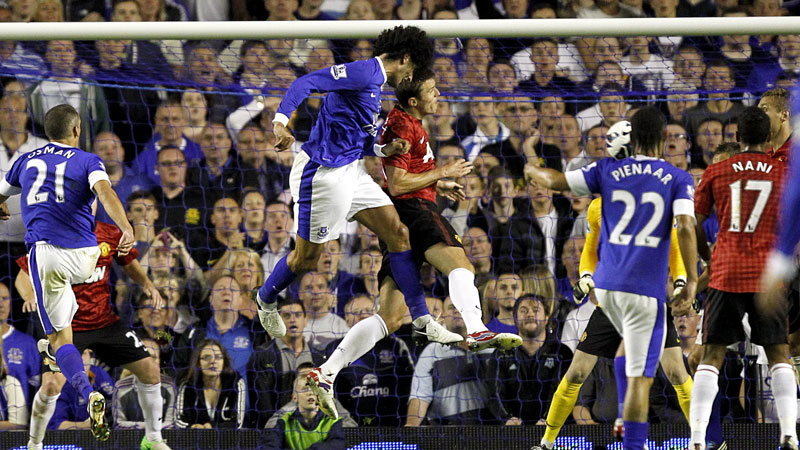 While defending champions and near-neighbours City achieved a come-from-behind win against Southampton yesterday the Red Devils were second best for most of the night at Goodison Park.

The thorn in their side was midfielder Marouane Fellaini, who was a constant threat and deservedly capped an impressive performance with the only goal early in the second half.

Van Persie, a £24million acquisition from Arsenal, was brought in to provide the additional firepower needed to challenge City but in a late substitute appearance he did not register a shot on target.

His team-mates had not done much better in the previous 70 minutes , however, as the Toffees dominated.

It was the first time United had failed to win their opening fixture since 2008 but it was a first victory in five seasons for the Toffees, perennial slow starters.

For once, though, they began the campaign where they had left off as after losing eight of their first 14 league games last season they went on a nine-match unbeaten run up to its conclusion.

One of those was a 4-4 draw at Old Trafford in which Fellaini played a key part, scoring in one of his more dominant performances, to help swing the title race in City’s favour.

Sir Alex Ferguson should have learned from that but he was hamstrung by the fact United started the match with just two recognised defenders: Nemanja Vidic, who had not played since December because of knee injury, and Patrice Evra, whose future has been a matter for debate all summer.

Winger Antonio Valencia was deployed at right-back while midfielder Michael Carrick was positioned alongside Vidic in the absence of the injured Rio Ferdinand.

That was a telling factor in David De Gea being the busiest – and most impressive – player in the first half.

However, he was run a close second by Fellaini, playing just behind striker Nikica Jelavic, who was the dominant force in United’s penalty area.

The Belgium international had already headed over Leighton Baines’ corner before he collected a throw-in and turned into the penalty area, holding off Carrick, to hit the post from the narrowest of angles.

He was also the creator as his aerial power and strength on the ball saw him chest one back for Steven Pienaar to slice wide and then knock down a cross which Leon Osman did superbly well to hit on the turn only for De Gea to bat away the shot.

The United goalkeeper, who arrived last season from Atletico Madrid and quickly earned a reputation for being suspect under pressure which he took a while to shake off, was on top form throughout.

He denied Jelavic, tipped over a long-range Pienaar header and flung himself to his left to save the South Africa midfielder’s low shot before preventing Baines’ deflected free-kick sneaking into the top corner.

But it was not all one-way traffic as United had chances of their own, though not as good or as numerous as their hosts.

Danny Welbeck, the player with most to lose from Van Persie’s arrival, had one shot blocked by Phil Jagielka and hooked another wide under pressure from the centre-back.

Fellaini’s ravaging of the United defence continued after the interval as his header across goal was smashed against the crossbar by Leon Osman with De Gea, for once, beaten.

And the big Belgian was finally rewarded for his outstanding display with a goal in the 57th minute when former Red Devil Darron Gibson swung over a corner and he left Carrick sprawling on the turf to power home a header.

The presence of one of United’s other summer signings Shinji Kagawa in the starting line-up had prompted a slight tweak in formation to accommodate the advanced role favoured by the attacking midfielder.

He had plenty of good touches around the penalty area, the best of which in the second half teed up Welbeck who was denied by Jagielka’s perfectly-judged tackle.

The Everton defender’s timing was even better when he cleared Tom Cleverley’s shot off the line before, in the 68th minute, Van Persie was finally sent on.

Rooney moved out to the left to allow the Dutchman to slot in up front but it was Kagawa who was next to threaten, forcing Howard to race off his line to block his run and shot.

Everton had won only twice at home against United in 17 years but this result proved, if they can maintain a half-decent start, they are destined for bigger things this season.

This blog is protected by Dave's Spam Karma 2: 2210 Spams eaten and counting...