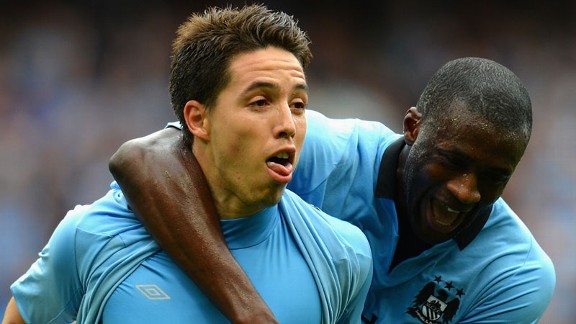 It was deja-vu all over again for Manchester City as the Barclays Premier League champions opened their title defence with a thrilling 3-2 win over newly-promoted Southampton.

Not only was the score exactly the same as that never-to-be-forgotten final home game against QPR last season, so was the scoring sequence, and even the ends they went in at the Etihad Stadium.

The major difference was that this time, City did not wait until injury-time before responding to falling behind.

Edin Dzeko was the man who equalised again though, before Samir Nasri fired home the winner 10 minutes from time.

It was tough on Southampton, who stuck doggedly to their task, but paid the price for only holding their lead for four minutes as Rickie Lambert and Steve Davis responded to Carlos Tevez’s first-half opener.

Of the team that started that momentous day in May, only Gareth Barry was missing from Roberto Mancini’s starting line-up.

In his place, Jack Rodwell was introduced, although the debutant could do nothing to raise the tempo of a tepid opening half hour that included a double blow for City.

The loss of Sergio Aguero was a big worry.

Brilliant in his first season at the club, and scorer of that title-winning goal, the Argentina forward tumbled awkwardly under an early Nathanial Clyne tackle.

Although a few City fans sought to blame the young full-back, he was not responsible.

Aguero simply got himself tangled and the fact he did not move when he went down, was a tell-tale sign that the injury could be a bad one.

After lengthy treatment, there was a brief moment of hope when the stretcher was ushered away and Aguero was able to hobble to the touchline.

It was soon back to carry him back to the dressing room though.

Early reports were encouraging and Mancini can only hope the damage, in one of the least congested periods of the season, is not too bad.

Without being near their best, it did seem City would make light of Aguero’s absence when Tevez turned far too smartly for Joss Hooiveld, whose attempt to do something constructive just inside the area only sent his opponent to the turf.

The initial surprise was that Tevez did not take the spot-kick himself.

It looked even more of a strange decision when David Silva rolled a pathetic effort straight at Kelvin Davis.

They had to reach the interval level. Tevez ensured they did not.

Tevez could not have timed his run any better as Nasri spotted him about to dart beyond Saints’ defence.

This time Jose Fonte was the defender who failed to keep tabs on his opponent, and Tevez made him pay by drilling a low shot into the near post, its power giving Davis no chance of keeping it out.

It was only after half-time that the ghosts of May 13 began to swirl.

As Dzeko, Gael Clichy and Silva all wasted excellent opportunities, a sense of foreboding began to gather.

After 27 goals in the Championship last season, Lambert’s omission had been something of a surprise in the first place.

Introduced by Adkins, the striker did not take long to make his mark, three minutes to be precise as he seized on a loose ball on the edge of the City box and guided it superbly into the corner of Joe Hart’s goal.

Worse was to come for the hosts when Rodwell gifted possession to Southampton inside his own half, allowing the visitors to pour forward.

Davis had been on the pitch even less time than Lambert.

But he had his shooting boots on as well and Southampton found themselves in front.

Had it not been for what happened on the last day of last season, no-one would have believed it.

That Southampton had done the damage with a possession statistic of 19% just made it more surreal.

The drama continued. Dzeko, who scored the stoppage-time equaliser against QPR, pulled City level with a first-time shot after Vincent Kompany’s piledriver had been blocked.

And 10 minutes from time, somewhat earlier than before, Nasri belted home from 12 yards to complete yet another thrilling comeback.