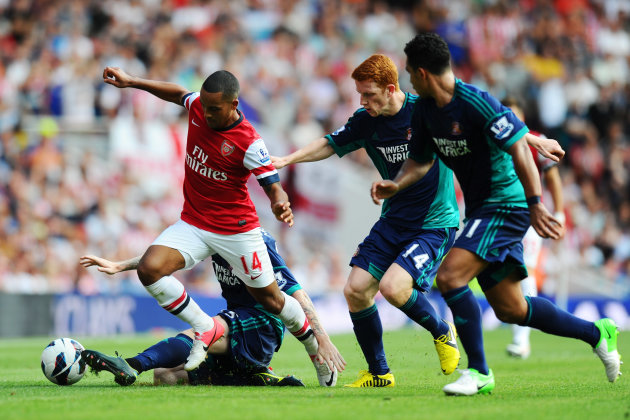 Arsenal started life after Robin van Persie with a frustrating goalless draw against Sunderland at the Emirates Stadium.

The Holland striker – whose 30 goals had dragged the Gunners into third place last season – completed a £24million move to Manchester United on Friday, having made it clear earlier in the summer he would not be signing a new deal.

When a clear opening eventually came their way late in the second half, substitute Olivier Giroud, who netted 21 goals for Montpellier last season, fired wide.

While there were plenty of positives to take from the work-rate of his side, manager Arsene Wenger will know there must be an improvement in conversion rate if Arsenal are to challenge over the course of the season.

New skipper Thomas Vermaelen received a warm welcome from the returning Arsenal faithful, along with summer signings Cazorla and Podolski in the starting line-up.

It was a lively start by the hosts but Sunderland remained dangerous on the counter through Stephane Sessegnon.

On six minutes, the Arsenal defence was opened up as James McClean slipped into the penalty area but his shot was blocked smartly by Wojciech Szczesny.

Spain international Cazorla, signed from Malaga, almost made himself an instant hero when he charged forwards and unleashed a 20-yard effort which Black Cats keeper Simon Mignolet beat away.

Sunderland created another decent opening when the ball was worked to Jack Colback at the edge of the Arsenal area but his low effort was straight at the keeper.

Gervinho skipped away down the left and rode a couple of tackles before cutting the ball back across goal, only for Cazorla to drill it wide.

The visitors, however, set up with two banks of four and were hard to break down.

Sunderland also looked to get forwards themselves, with the best success again coming down the left flank though Sessegnon.

Arsenal finally pulled some passes together as Theo Walcott was played into the right and his cutback to the near post was hacked behind before Podolski could get there.

The second half opened the same pattern, with the hosts were left frustrated by some stern defending as much as their own poor choice of final pass.

On 57 minutes, Kieran Richardson upended Walcott some 25 yards out. Podolski took the free-kick but the German’s effort flew just over.

As the hour mark passed, Sessegnon was replaced by Louis Saha, signed on a free transfer after he left Tottenham.

The Gunners also made a change when Giroud came on for his debut, Podolski making way.

Wenger then aimed to inject some fresh ideas into midfield as Wales captain Aaron Ramsey – part of the Team GB Olympic squad this summer – came on for the hard-working Diaby.

Sunderland continued to sit back but Arsenal failed to make the most of their possession heading into the final 15 minutes, when Walcott was replaced by Andrey Arshavin, the Russian whose future remains uncertain following a loan spell at former club Zenit St Petersburg last season.

With nine minutes left, Cazorla played in Giroud but the French striker, so clinical in Ligue 1 last season, fired wide from 10 yards.

Arsenal pressed in search of a winner during four minutes of stoppage time but had to be content with just a point – which was greeted by boos from some home supporters.