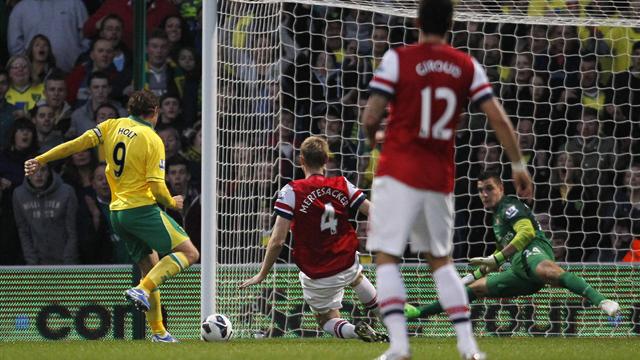 The Gunners, who included England midfielder Jack Wilshere in the squad after more than a year out with injury, were second best all afternoon as Grant Holt’s scrambled effort after 20 minutes following a mistake by goalkeeper Vito Mannone proved enough for all three points to move the hosts out of the relegation zone.

Arsenal, who have now lost two of their past three league games, were well below the usual fluent best and created very few openings as for once the Premier League’s second worst defence held firm.

At the other end, German forward Lukas Podolski cut in from the left and flashed a shot across the face of John Ruddy’s goal.

Norwich did not resemble a team which had shipped 17 goals in their previous seven games, and looked much more of an attacking threat with Wes Hoolahan tucked in behind Holt.

The Canaries were in front in the 20th minute.

Norway midfielder Alex Tettey let fly from 25 yards across a skiddy surface and Mannone – again deputising for injured number one Wojciech Szczesny – parried the ball back out into the six-yard box, where Holt was quickest to react ahead of Per Mertesacker and stab home.

Arsenal had also fallen behind at West Ham last time out, and soon went on the offensive again.

Bradley Johnson, who was on Arsenal’s books as a youngster, was cautioned for a late challenge on Santi Cazorla.

There was, though, panic in the visitors’ box again when Holt drew Mannone out to the touchline and hooked the ball back across goal, where Carl Jenkinson hacked it clear as Pilkington was set to shoot at an unguarded net.

Despite all of their possession, Arsenal lacked a killer pass in the final third, and Norwich looked dangerous on the counter-attack.

Centre-back Michael Turner planted a free header wide after a late run into the six-yard box from a corner.

At the other end, Gervinho was picked out by an angled free-kick from Mikel Arteta, but completely missed the ball – much to the delight of the home crowd.

Arsenal pressed Norwich back at the start of the second half, but again looked suspect from balls into their own area as Javier Garrido’s floated cross from the left just eluded Holt at the far post.

The Gunners broke quickly on 51 minutes with Jenkinson’s cross palmed away by Ruddy – but Olivier Giroud could only hook the loose ball wide.

Hoolahan thought he had sprung the offside trap as he darted through to net from Johnson’s pass – but despite claims he could not hear the whistle, the Irishman was quickly shown a yellow card by referee Lee Probert.

As the hour mark passed Norwich continued to press with Holt again asking questions of the Gunners’ defence.

When Arsenal did break, Gervinho’s header lacked any pace after a clever flick-on by Giroud.

Wenger had seen enough and on 65 minutes Podolski was replaced by England midfielder Alex Oxlade-Chamberlain.

Turner went through the back of Giroud to concede a free-kick some 22 yards out, just right of centre. Cazorla curled his effort around the wall, but it lacked enough pace to test Ruddy.

Oxlade-Chamberlain picked up what looked like a hip problem, and had to be replaced by Andrey Arshavin after less than 10 minutes.

Norwich made a change for the final 12 minutes when winger Elliott Bennett was replaced by Robert Snodgrass, fit again after missing Scotland’s World Cup qualifiers because of an ankle problem.

Holt capitalised on a slip by Thomas Vermaelen on the half-way line to rush clear – only to then float a tame chip at the keeper with Hoolahan unmarked to his left.

Arteta’s low strike was held by Ruddy as Norwich closed out a hard-earned first league win through five minutes of added time.

This blog is protected by Dave's Spam Karma 2: 2108 Spams eaten and counting...