The hosts played 51 minutes with 10 men after Jonjo Shelvey’s sending-off but still managed to take the lead through Steven Gerrard’s volley seconds after the interval.

However, Rafael equalised soon after and Van Persie, one of three United players to miss from the spot this term, scored his fourth goal in as many games against the Reds – although three of those had come for former side Arsenal – nine minutes from time.

In the end it was something of a relief the talking points were all generated on the pitch as Liverpool marked their first home match since the publication of the Hillsborough Independent Panel’s report which exonerated fans in relation to the 1989 disaster.

Luis Suarez and Patrice Evra shook hands in a show of unity before the game – the Liverpool forward had refused to shake the United defender’s hand in the league meeting between the sides at Old Trafford in February, having previously been found guilty of racially abusing Evra in the corresponding fixture at Anfield last season.

Thankfully there were none of the distasteful chants which have marred this fixture for years, although that did not mean there was not an edge to the game.

Evra was overlooked for the captaincy – some say diplomatically – in the absence of Nemanja Vidic so it was Ryan Giggs who released 96 red balloons with Gerrard prior to kick-off.

The result left Liverpool rooted in the bottom three as their worst start to a campaign for a century continues whereas United maintained their usual progress moving up to second.

It was harsh on Brendan Rodgers’ side, who continued to take the game to their rivals despite being short on numbers as they desperately looked for their first league victory of the campaign.

United may have left Anfield wondering how they managed to win having hardly threatened in attack and failed to dominate midfield until the final quarter but those concerns will have been of little consequence.

For the first minute of the match three sides of Anfield held up The Truth, Justice and 96 mosaics as representatives of the Hillsborough victims’ families watched on from the directors’ box.

Also present, for the first time since being sacked in May, was former manager Kenny Dalglish – intrinsically linked with the tragedy having played a major role in the aftermath during his first spell in charge.

What he saw in the first half would have been very familiar as for most of last season his sides dominated at home without scoring.

Once Giggs had flashed an early shot wide the momentum was all with the hosts as a Suarez cross-shot was stopped by Anders Lindegaard and headed away by Jonny Evans under pressure from Fabio Borini.

Gerrard drove a low effort from Shelvey’s corner into the side-netting and Suarez looped a right-footed shot wide before a match which, possibly because of the all the pre-match commemorations, had lacked the usual hallmarks of a north-west derby ignited.

Shelvey robbed Giggs in midfield but as the ball broke free he launched himself at Evans and the inevitable outcome was a red card.

The 20-year-old midfielder, who scored twice in Thursday’s Europa League victory at Young Boys, departed down the tunnel having exchanged heated words with Sir Alex Ferguson.

Even with a numerical disadvantage Liverpool continued to pressurise United and Suarez drew Lindegaard into a low saw from his free-kick.

The visitors would have been pleased to reach the interval with their goal intact but it took just 50 seconds after the restart for that to change.

A tackle from Paul Scholes, on for Nani at half-time, succeeded only in diverting the ball towards Gerrard who volleyed home left-footed in front of the Kop.

The Reds captain, whose 10-year-old cousin Jon-Paul Gilhooley was the youngest victim of the Hillsborough disaster, whirled away pointing both arms to the sky in celebration and remembrance.

It was short-lived, however, as within five minutes United were level when Shinji Kagawa laid the ball off for Rafael to brilliantly curl left-footed over Jose Reina and in off the far post.

Rodgers’ determination not to just shut up shop and settle for a draw was reflected in the approach of his team who made light of the fact they were a man down with Suso having a shot tipped over by Lindegaard and Suarez continuing to trouble the visitors’ defence.

But as the match entered the final 20 minutes United began to take more control, although their winner came from their opponents giving away possession on the halfway line.

Daniel Agger and Johnson collided to allow Antonio Valencia to race 50 yards into the area and although Johnson got back he could only bring down the Ecuador international.

Van Persie drilled home – although Reina went the right way and almost made the stop.

Liverpool down to ten

m-38: A good week ends terribly for Shelvey as he is sent off for a terrible lunge on Evans.

Luis Suarez and Patrice Evra shook hands, but Jonjo Shelvey was sent off in the first-half after a two-footed tackle. In the second, Steven Gerrard put the ten-men ahead, but a wonderful curling equaliser from Rafael made it 1-1. 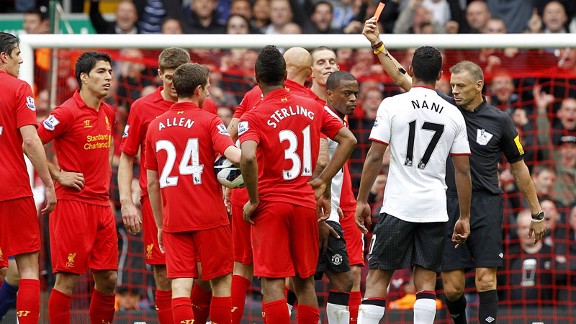 This blog is protected by Dave's Spam Karma 2: 2114 Spams eaten and counting...